This fairy tale is a good analogy for balance in leadership. What is required of you as a leader will change as both your career and your situations evolve. As a leader, you want to choose the approach that is” just right.” The following two examples of clients I have coached will hopefully illustrate what I mean.

She (let’s call her Susan) was a senior executive now reporting to the CEO and working with the board of directors. The new role was challenging, and quickly Susan became overwhelmed. She was in the weeds, redoing, revising, resolving, and inserting herself into situations where her staff appeared unable to derive the outcome she wanted. In addition, these direct reports were formerly peers. Susan struggled to get her team to a place where she could let go of projects and focus on strategy and the big picture, which her new role required.

He (let’s call him Bob) had just been promoted from CFO to a General Manager. Employee surveys had shown that Bob’s team was demotivated by their previous manager and they were anxious to see how Bob would engage the team. His inclination was to become an expert, so that he could prove his command of his new area of responsibility. For Bob, becoming an expert meant learning what each of the team members were responsible for and knowing as much or more than they did. Quite a feat for any leader. Whenever a project required financial modeling, he knew he could turn the project around faster if he simply completed it himself. Therefore, he did. 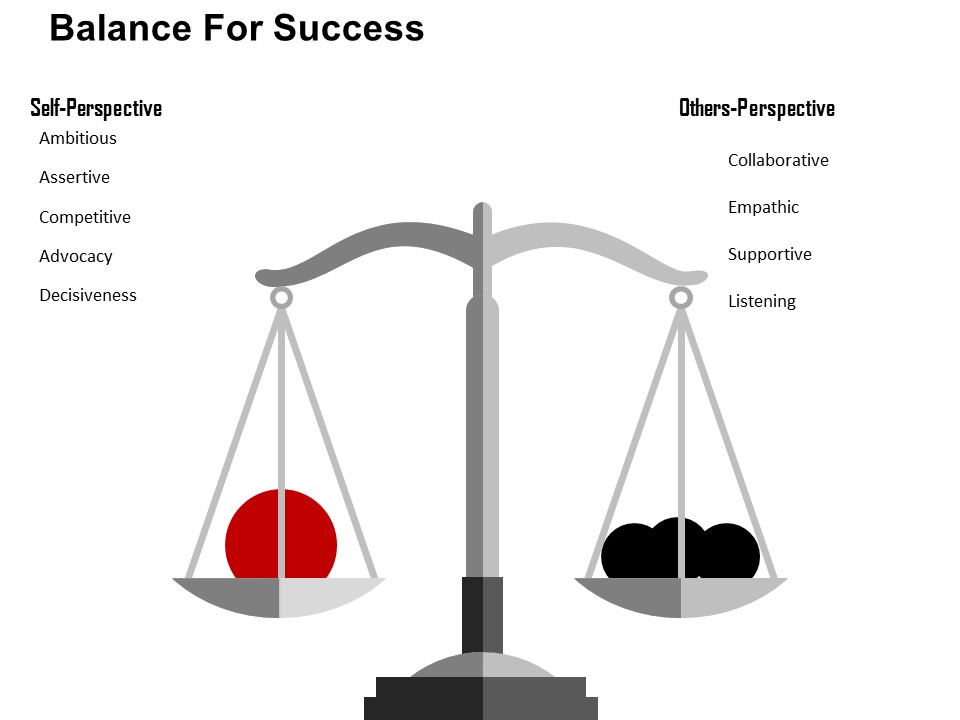 What do these two executives have in common? While each of these examples could lead you to believe that these executives are micromanaging, could it be something else? Both Susan and Bob were working from their comfort zone, using the skills that had got them promoted rather than focusing on what the new situation required, resulting in an imbalance in their leadership. Many executives who transition into greater roles have trouble balancing their perspective. They are either too focused on themselves or too focused on others. The best leaders learn how to balance their needs with the needs of others. Such balance requires constant recalibration to know which behaviors are required in any given situation.

Too Much Focus on Others
While Susan’s behavior may not seem like she was focusing on others, she was motivated by a desire to not stress her team. She wanted to give her team room to do the work in their own way and was concerned about being directive. However, she also needed to set clear expectations for the outcome. By not telling her team what she needed from them, they were unable to deliver it. Rather than “stress” them by providing clear feedback on what would improve the work product, she simply redid their work. Therefore, setting up a cycle where they would never be able to improve, and she would continue to be overwhelmed. By asking herself, “What do I need in this situation?” she was able to shift her perspective and begin to create more balance. Once she could articulate what she was seeking in an outcome and provide feedback when projects missed the mark, her team began to produce outcomes consistent with her needs.
Research shows that most women leaders emphasize people/relationship more than task/result. One of those leaders was BET Networks’ CEO Debra Lee, who was interviewed by Adam Bryant, when he was writing for the New York Times. In his column, The Corner Office, Lee shared how she learned to let go of a more supportive style associated with women.

I’m a consensus builder and I like having my executives on the same page and I like motivating them that way – let’s talk about it, let’s all agree on it. But I found very quickly that as CEO I couldn’t do that anymore, I really had to be the individual who took charge and was clear as the leader of the company, it had to be about where I wanted to take this company. (1)

Too Much Focus on Self
Bob’s imbalance was due to his focus on self. He had climbed the finance ladder by developing specific expertise. Trying to become an expert when his role required him to be a generalist was his way of staying in his comfort zone. To shift his perspective, he used the leader as coach model to engage the team to learn more about their strengths and capabilities. In addition, he used their team meetings to bring challenging opportunities and expand their knowledge of financial modeling to help them become more efficient and effective. When the employee survey was fielded during the first year of his tenure, he received high ratings from the team. And equally as important, when a project required financial modeling, his team now was able to deliver it faster.
Men’s leadership behavior is typically centered on power and tasks: showing their ability and knowledge, challenging others and resisting challenge and seeking to win. In Adam Bryant’s interview with Niki Leondakis, former CEO of Equinox and President and COO of Kimpton Hotels & Restaurants’, she shared how over time she changed her initial leadership focus on task-related skills associated with men.

In the early ’80s … we (women) all thought to be successful or to be considered equal, you tried to really dress like men, act like men and ensure people knew you were tough-minded and could make the tough calls and be decisive. So, I was holding back on some of my leadership strengths – collaboration, inclusion and building and creating teams. I was trying to be somebody I wasn’t… The person I worked for at that time could see my struggle and said … “You can still do what you have to do, but you don’t have to be a jerk about it.” And that was sort of an epiphany for me, because I thought that being tough-minded and decisive and all those qualities and traits that I thought I was supposed to exhibit, that men exhibited, meant that I couldn’t show compassion. From that point on, there was an awareness I had that there was this balance I could strike with being myself, being compassionate and holding people accountable. They were not mutually exclusive.(2)

Every leader needs a balance of people and task-related behaviors and to know when to use which. The higher you rise in an organization, the more you are required to assess risk, make quick decisions and engage employees. Coaching makes a difference because it helps people see their blind spots and where development can have the greatest impact. That kind of support and focus can help leaders avoid making critical errors during their leadership transitions. If I were CEO, every leader promoted, would receive a coach for at least 6 months at junior levels and nine months to a year at senior levels. It’s worth the investment.