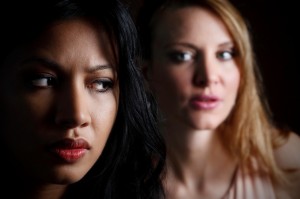 That’s the way one CEO described what he saw as divisiveness between female executives. “Why is it that you all don’t work well together?” he inquired. “If one of you is progressing, the others are nipping at you, trying to pull you back down.” If you have ever cooked crabs, you have observed this behavior. As one crab gets to the top and is ready to climb over the edge, another pulls it down, so that it might escape instead. No one gets out and they all die together.

It stung to hear the opinion of this influential executive and to know that he believed this was a stereotypical problem with women in the workplace. Fortunately, my initial reaction- to protect the sisterhood – diminished, and I responded with what I knew to be true. My first truth is that as a mentor to many female colleagues, I wanted all women to succeed. The second truth is that some of my female colleagues are a delight to work with, highly competent, supportive, emotionally intelligent, confident and secure. However, like all stereotypes, there was a modicum of truth in his statement. I had also worked with women who were jealous, envious, petty, devious, and some whose insecurities made them complete management nightmares.

However, I wondered, did other women recognize this behavior in themselves or in others? Chin-Ning Chu, in the Art of War for Women recounts that in one of her women’s workshops, she asked a thousand plus women, “Who is the enemy?, to which they responded:
• Myself
• Other Women
• Men

As women are urged to Lean In, to make our voice heard, are we ignoring the elephant in the room? If women want to succeed in the business world, don’t we need to tame this demon that drags us all down? There is much we can learn about managing this demon from the behavior of our male colleagues and even more to learn from the women who mastered these demons. Here are a few areas where they excel.

This may be the single most helpful perspective for anyone in the dynamic environment of the business world. Decisions are made daily that have nothing to do with any one individual. No one agrees with every decision or action and how you handle disagreement is critical to your personal reputation.
I can’t count how many times I have been in the presence of male colleagues who disagree openly and vigorously. Yet, after these exchanges, they pat each other on the back, confirm their upcoming golf date and walk away in a good mood. On the other hand, I have seen women, after being involved in a disagreement, give others the cold shoulder and hold grudges. Much has been written about the passive-aggressive behavior of females and the origins and impact of that behavior, and while it can be explained, that does not mean it is acceptable. Take the case of Shelly, a marketing analyst, who asked a probing question of her colleague Jill, a marketing manager, during her presentation to the marketing leadership team. The male leader of the marketing team thought the question was insightful and thanked Shelley for her observation. After the meeting, Jill strategized how to get Shelley off of this team project and even tried to undermine her with her supervisor. She went so far as to lie about Shelley’s contributions and the quality of her work. Through it all, Shelley maintained her professionalism and quality of her work product, while Jill became more emotional and unprofessional. Who do you think the head of marketing later promoted?
Imagine how differently this situation might have gone for Jill if she had been the one thanking Shelley for her input and later following up with her to learn more about her perspective. Jill might have made Shelley an ally instead of an enemy and advanced her own career. Instead, she paid a steep price for her reaction, earning a reputation for being difficult and aggressive.

We are all unique human beings with unique talents and skills. Our greatest quest in life is to recognize and accept our uniqueness and what it means for our life purpose. No one is good at everything. I have never heard a man openly compare himself to another man, although some women do it routinely. Instead, I have heard men openly recognize and admire another man’s strengths and look to have him on their team when the opportunity arises.
Some women, just like Jill, can become jealous of another woman’s strengths. Here are some of the comments I have heard and even may have been said about me: “The only reason she got that job is because she (fill in the blank) – wears tight clothes, is a brown noser, is black, is white, is pretty, is like a man, talks a good game…… Honestly, no matter what you think you know about the other person, you need to recognize these comments for what they are- judgmental and reeking of jealousy.
Instead, why not focus on building your strengths not on negating another’s. Imagine how much more effective it would be to use your energy to build your own skills and reputation rather than participating in passive-aggressive behavior that has no positive outcome. If Jill had followed up with Shelley, she might have learned to appreciate that Shelley’s keen analytical thinking could help her improve her proposals and presentations. Instead, she saw her as a threat.

[box type=”shadow”]3. They are Emotionally Intelligent[/box]

Everyone feels negative emotions; however, what matters is how you use those emotions. Jill took her negative emotions and allowed them to set the agenda. When we experience emotion, our ability to think is temporarily high jacked. She may not have been aware of what she was feeling and why. It is likely that she attributed what she felt to Shelley actions rather than her own beliefs and perceptions.
Effective leaders think before they act and don’t let their emotions take them down a path that is different from their intentions. I have worked with more women who demonstrate emotionally intelligent behavior than I have men. Perhaps it is because so few women make it to the highest levels of leadership and therefore, only those who are emotionally intelligent can break through. Alternatively, it may be because men are forgiven for their emotional outbursts, and not subject to the same expectations. Everyone knows of a woman who yelled, or worse cried at a meeting and from that day forward, her fate was sealed. There lies the rub. Women try so hard not to be emotional, that we are more prone to reach that threshold where all that we repressed comes bursting through, like the breaking of a levy in a torrential storm. It turns out that the secret to managing emotions is to allow them to surface, rather than repress them. When you find yourself feeling resentment, jealousy, envy, ask yourself why this feeling in coming up in you? Is it because someone has accomplished something that you wanted to accomplish? Is it because you feel threatened?
If Jill allowed her emotions to surface and examined what she was feeling, she might have discovered that she was feeling threatened that Shelley uncovered a hole in her data. She may also have realized that Shelley’s job was to vet the data and working more closely with her may have improved her own skill and presentations.

There is no doubt that as women in the workplace we have so much to manage related to our image and reputation. While it may not be fair, it is real. One thing I am sure of is if we support and admire each other, our ranks will grow, we will all make it out of the barrel and the workplace will benefit.