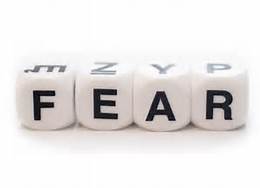 Shame on you for thinking you were going to find some provocative article on the F word- and we all know which word you had in mind. While that F word can be used in damaging ways, the most damaging F word is FEAR. Why?  Because it is one of the greatest roadblocks to true success. I’m not just talking about fear of failure, fear of success is equally to blame. I recently saw someone describe fear as the acronym for False Evidence Appearing Real. Fear can derail your dreams, your desires and even your relationships at work and home. Things like staying in a job or relationship that makes you miserable, or withstanding bad treatment from others because you are afraid that standing up for yourself will end or damage the relationship.

Just for the record, you are not alone, everyone feels fear. However, not everyone succumbs to fear. People who don’t succumb to fear know that fear is simply in their heads. It’s the things we tell ourselves –I could never make it on my own; people will think I’m crazy if I quit my job; I could never be a consultant; what’s the use in putting together a proposal, no one is going to like my ideas; no one will ever love me, ……………and the list goes on and on. So why do some people give in to fear and others rise above it?  They have learned to either silence their fears or use their fears to motivate them. Let’s use the acronym to review a few techniques that might help.

Face your fears. I know what you are thinking- if I could, I would. Start by calling them out. What do you fear?  What is that fear based on? I had a client who very much wanted to start her own business but was afraid to commit to the effort. After discussing her conflict, she shared that friends, family and even colleagues all told her that she could never be successful as an entrepreneur. She was afraid they were right about her and she was wrong about herself. So we started small. She took on a few projects and saw that she could gain clients, but learned that her business model needed tweaking. If she had not taken that step, she would have always wondered, what if.  Rather than looking at it as an all or nothing proposition we worked through the following questions.  What if you could minimize the fear? What if you could break it down into small steps you could take? What if you could test the idea before you risk everything?   Using this technique, she was able to move forward instead of stagnating in her fear.
Engage in positive self talk. My first exposure to this concept was this Saturday Night Live skit. http://www.youtube.com/watch?feature=player_embedded&v=fny40Ut_RZA#t=41
While the skit pokes fun at the technique, psychology provides evidence of its effectiveness. One way to change your thoughts is to tell yourself what you want to hear. Whenever fear threatens to overtake you, give yourself a pep talk. I remember waking in a panic one morning fearful that I was going to run out of money before my new career took off. As I went to my home office, I say the note on my bulletin board “ You have everything that you need, stay the course.” Growing up poor, the fear of being poor again is ever present and was a powerful driver of the work all the time, unbalanced lifestyle that had drove me to the brink of physical, emotional and spiritual exhaustion. After a while, the thought of going back to that way of living was a more powerful motivator to stay the course.
Accept your fears for what they are- manifestations of your own thinking. People who know me will find it hard to believe but I was once terrified of speaking in front of a crowd. The first time I had to speak in front of a crowd was in 6th grade when my best friend was running for Mayor of our school and I served as her campaign manager. As we were preparing for the school assembly, the teacher asked, what’s that noise?  It as my knees knocking together.  I was terrified that they appeared to be moving involuntarily. But, I got up and spoke and made it through the speech. The next time I performed in front of the entire school was in high school.  By then, I had graduated to twisting the hem of my skirt- true progress. It became easier every time, until one day in my twenties, I realized that I now enjoyed public speaking and began seeking positions where I could communicate more.
Revise your definition. Muhammad Ali said you can’t be brave without fear. So think of fear as an opportunity to practice bravery.  Reframing might help you see that fear can be valuable for personal growth.

Bottom line: Don’t let fear stop you from reaching your goals and realizing your full potential. Marianne Williamson said it best, “Our deepest fear is not that we are inadequate. Our deepest fear is that we are powerful beyond measure. It is our light, not our darkness, that most frightens us. We ask ourselves, who am I to be brilliant, gorgeous, talented, and fabulous? Actually, who are you not to be? .And as we let our own light shine, we unconsciously give other people permission to do the same. As we are liberated from our own fear, our presence automatically liberates others.”